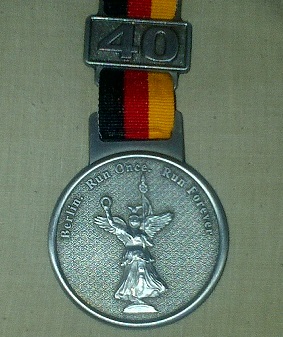 Even a snail makes the finish….

The 40th Berlin Marathon on 29th September 2013 was the big highlight of Andrew’s and my Germany trip this September. WHAT an experience! 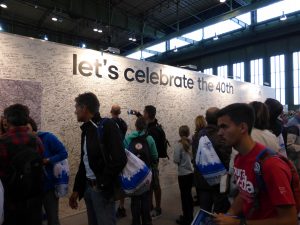 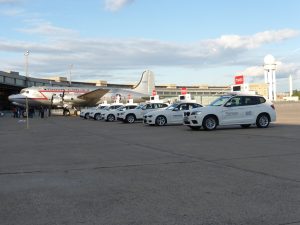 Our marathon weekend started on Friday with the registration and expo at the historical Tempelhof Airport. We arrived there by underground railway and everything there was organized perfectly to get our start numbers. Both the atmosphere with all our fellow international runners as well as the great music got us into the marathon mood and even more excited! All the big companies for running supplies, apparel, sports nutrition etc. could be found in the huge halls of the expo, and outside- on the runway of the airport- they had the historic candy bombers standing. We could even watch some of the inline- skaters that were getting themselves warmed up on the runway for ‘their’ marathon on Saturday.

On Saturday, the day before the marathon, we did the Breakfast Run which started at the picturesque Charlottenburg Castle with a couple of thousand participants. This 6km fun run is perfect to get the legs moving a little before the big day and to just enjoy yourself with all the other runners. Since there are so many different nationalities of runners, lots of people ran with their respective home country flags or dressed up, either with wigs, as penguins, pirates, you name it… J By the way, even Haile Gebrselassie appeared at the start of this race. 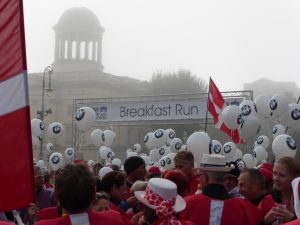 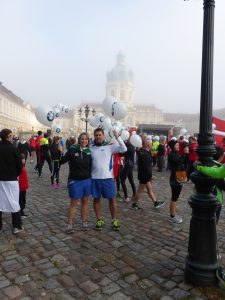 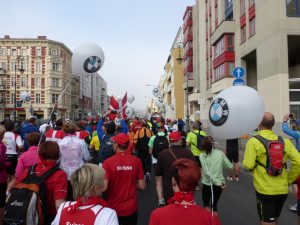 Of course, Andrew and I were running with our South Africa flags and we quickly met other South Africans, that even knew our friends from Hout Bay. And after the run, we even bumped into Andrew’s previous German teacher Bettina from Cape Town…. Which proves again that the world is a village!

After the Breakfast Run finished inside the Olympia Stadium, we could get some breakfast goodies at the stalls outside – after fighting our way to the front of the stalls through the crowds of people. This was a little disorganized but with some juice, apple and a chocolate croissant we were quite happy and generally, the Breakfast Run is a great thing to do when you’re doing the Marathon!

The big day was finally here on Sunday morning! In South African terms, the race starts very late at 08h45 ( we normally have finished a half marathon in South Africa by that time!), but we wanted to not get pressed for time, so we took the underground railway at 06h30 to Potsdamer Platz and walking towards the Brandenburg Gate and Straße des 17. Juni with thousands of fellow runners. After a couple of pictures of the Brandenburg Gate in the morning sun, we made our way to the start area. Security everywhere was quite tight and we had to show our blue Marathon ribbons a couple of times on various check points to get to the start area, but this still went very quickly for us. The tog bag facilities were well organized and we found Andrew’s spot quite quickly. The tog bag tents were organized by race numbers and the female tents quite far away from the male ones’… but we still made it in time to be at the start area at 08h30. 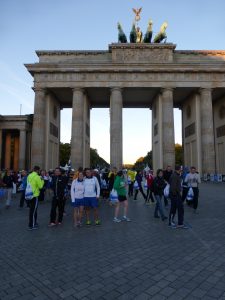 Of course, with all the thousands of runners and the music, the start of the marathon was a big goose-bumps moment for me and after a short while, Andrew had disappeared in the crowds in front of me and I started to ease into the race. Especially in the beginning, there are lots of people around, but from 3 – 4 kms onwards, I could run my comfortable pace without zig-zagging other runners.

The weather was just perfect, about 11 degrees and quite cool, but sunny and without any clouds.

As I am not a very fast runner ( my fastest Half marathon time is a 2h16) and with so many people running this race, I knew that I would not be running my fastest time in any case and I just ran comfortably without thinking about my time. This proved to be just perfect for me and I took a photo- or water stop every 10 – 12 minutes and then continued running.

It’s amazing to see all the different areas of Berlin, there’s something to see everywhere and the first 21kms almost went past in a flash. But of course, I also have to mention that we runners had the most fantastic support from the spectators and the people from Berlin. In 5 years of running, I have never run a race before that had hundreds of people cheering and clapping for us runners on every corner and every single street of the race. This support really carried me a lot, especially after the 30kms when the going starts to get a little tougher… One lady in Kreuzberg just shouted: Julia! You can do it! You’re my hero!!! ☺ 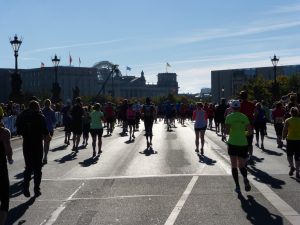 After a couple of walking and drinks breaks, I eventually got to Kilometer 41. From here it’s not far anymore until you see the Brandenburg Gate ahead of you and even though it’s been a loooong day on the road up to that time, suddenly I didn’t feel tired anymore and was loving every second of the last few hundred meters. We ran past the prestigious Hotel Adlon at the Pariser Platz and then through the magnificent Brandenburg Gate which is SUCH an emotional moment considering all the historic events around the Berlin wall that happened at this spot. And knowing that I had finally made it to the finish, was just the best feeling ever! The last few meters to reach the finish line are just a breeze and not even the fact that they had run out of medals could wipe that huge smile off my face! The organizers have promised to mail our medals in the coming weeks and I really hope I still get my one. But even if not… I have taken such unforgettable memories from this race which are far better than any medal! 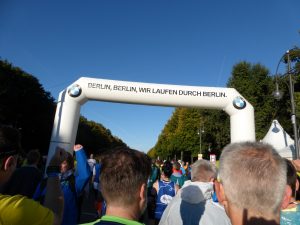 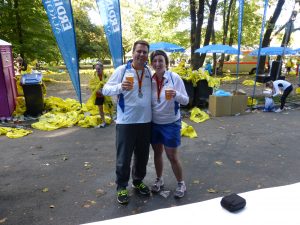 Of course, a big highlight was also the new world record of Wilson Kipsang who ran an unbelievable 2:03:38. What an achievement!

Even though I did not finish anywhere near such a great marathon time, I have absolutely enjoyed it and it will definitely not be the last one for Andrew and me. And next time again, my motto will be: Even a snail makes the finish….