6 months of training and dedication come down to one day – either success or disappointment. Even though I did not complete this race this time I was disappointed at first but I have had time to reflect and I have learnt an alternative word to disappointment which is RESPECT. This race teaches you many things about yourself that you were not aware of. If you did not learn anything then maybe your heart was not in it.

I will break R.E.S.P.E.C.T. in to individual words for the Comrades:

My Race review:
The 90th Comrades was to be my second run and I was in contention to earn a “Back-to-Back Medal.” This is only achievable on your very first and second completion of both runs. It was mine for the taking as my training was better than last year. I was mentally and physically fitter than ever before. Sadly, I was unsuccessful this time around. I entered my race with plan A and plan B. Plan A would be a sub 11 hour race and plan B would be to finish with the 12 hour bus if things were not going to my primary plan. In the end I should have opted with plan C which would be the “Grown-Up” decision. Plan C would be to not run at all due to a bout of flu I caught the week before race day. Even Lindsey Parry who is the official Comrades Coach recommends that you do not run if you have been sick in the last three weeks before race day. I think most of us runners don’t listen to our bodies or take advice from others easily as we invest so much time and do not want to miss out on what we have trained for. 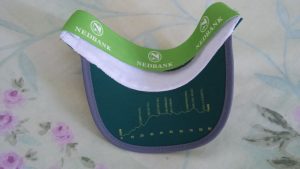 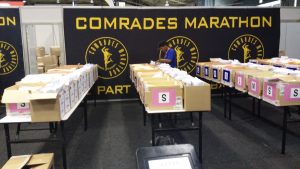 We travelled up from Cape Town on the Thursday before and went straight to the expo. It was an amazing change from last year where we stood in queues for about 1.5 hours. This year I walked straight to the front of my nominated queue and was speedily on my way to walk around the expo. We had a choice of either a full cap or a visor. I chose a visor. They have the route profile on the underneath of the peak. A quick walk around to get a few last minute items and a free health check by Bonitas (promised my mother to get checked) and then we left. All fine except blood pressure was quite high but the nurse said it was ok. There was quite a bit to see and do at the expo but I did not want to be on my legs too long so close to raceday. Friday and Saturday were rest days and I watched Super 15 rugby for most of these days. Early to bed on Saturday night as we left for Durban at 03:30 on raceday to be there before the roads get congested. My wife dropped me off and I went to my start batch. I was met with a fellow club runner and we chatted which helped me settle my nerves. 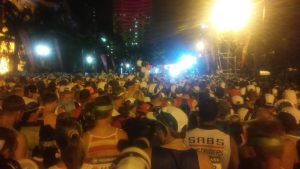 The start area is amazing as you can feel so many different emotions. Either yours or even your fellow runner. The National Anthem is played then Shosoloza and followed by the cock crow and bang you are off. A full 7 minutes for me to cross the start. It is a steady climb out of Durban. You will probably climb for a full marathon before you feel like it is a bit flatter. Outside of Durban I saw a fellow club member that wisely chose option C. I caught up to another club member in Pinetown where we made our way up Fields Hill. We chose to run and walk this hill. It is punishing which ever direction you are running as it is long and steep. We eventually made our way to Hillcrest (around 37km done) where my support base was waiting. My wife, sister and brother –in-law were waiting there. After a quick kiss and a photo we were off again. After Hillcrest we met Botha’s Hill. This is where I could feel I needed plan B as my claves were starting to twitch and a sign that it was going to be a longday.Disappointed at my condition as I had been taking tissue salts every hour and they worked really well during the Two Oceans Ultra Marathon. It was too early for me to start cramping but I persevered towards my goal of getting to Pietermaritsburg. The supporters were fantastic and keep you going. They encourage you and sometimes I even believed them that I was still looking good although I was dying inside. When I was just past Inchanga with about 36 kilometers to go it all went downhill for me. I stopped to let my wife know where I was and I cramped. First my right calf started cramping and then Arden whom I finished my previous Comrades with helped me but I could feel I needed something else and told him he had to go (He completed and got his Back-to-Back medal 11:46) Then both legs gave in and I ended up lying on the ground. In pain, 3 runners helped me to my feet and one runner took out a bag of salt a told me to suck on it.. After I was able to go again I made it to a physio and had a rub down. In mid rub down she stopped and I realised that I had thorns all over me from when I was on the ground. She got one in her thumb. My apologies to her! After this she recommended I see the medical tent. The nursing sister said I was fine. I had a phone call from a friend and he said I need to rub the calves down as much as possible with ice. I managed to get a block at the next water table. This helped and I was again on my way. I made it to Cato Ridge and was 45 minutes ahead of the cut-off at this point (57.7km done and 30km to go) 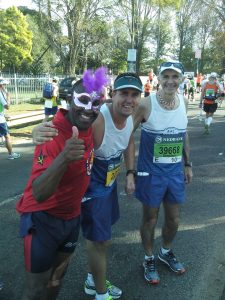 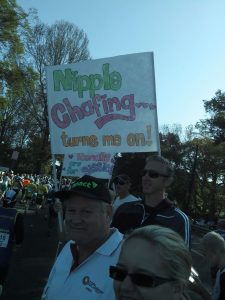 Shortly before Camperdown my plan B arrived…The 12 hour bus! I was struggling at this point and I could feel the energy of this bus. I ran for a few minutes with them but I could feel my day was going to get harder. Then the second 12 hour bus arrived and I could not keep up with them. I met my wife in Camperdown where she was waiting patiently. She had some food for me but at that point I could not eat anymore. She rubbed my calves down again and while she was rubbing my calves down a fellow runner stopped and waited patiently for her to help him out with a rub down. She obliged and then I shuffled on as I felt I may be able to accomplish my goal. (Remember “P” for persevere and keep moving) I made it to Umlaas Road Interchange with 20km left and just on 3 hours to complete and my mind said YES, you can do it. At this point your mind plays tricks on you as an easy 21km run is 2 hours or less and with an extra hour added this is easy. Wrong! At 15km to go I ran past my aunt as they live near Lynfield Park and was encouraged by both their support and how I was feeling. 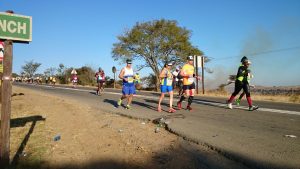 I Can still do it:

15km left and 2:10 to do it within. Game on! Then at 12km to go I realised it may be over. I could not run anymore without my legs wanting to cramp. I could not find ice at any of the next 2 water stations. It was a warm day and they were out there for a long time already. At 10km to go I had a rub down and was again on my way. This was the point I realised my day was over. A bus was driving slowly behind me. Should I get in? No, go as far until you are pulled off was what I had in my mind. Tears flowed as I knew I could not make it and I had disappointed myself and friends that woke up early to watch and support. Now I was on the last named hill – Polly Shortts (this hill has been the heart break of many professional runners vying for a gold medal). The 9km to go board was there and cut-off was 14 minutes away at 8km mark. I can still do it, just keep walking and didn’t give up. I was then met by a fellow club runner and he said to me to keep going. I tried to go but I couldn’t and then suddenly I managed to shuffle along again and caught up to him. We made it to the 8km marker and we looked at each other and felt that it was strange as there was not real activity at that point. Did we made it…? Then a little further along and approximately 40 meters away we heard a gun go off. NO, that was the actual cut-off and we did not make it. A mere 40 meters away! Yes, I can still smell the gun powder. 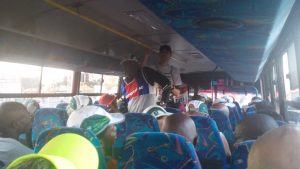 Wow, emotional as it was I was relieved that I could get into a bus and I did not need to run the last few kilometres as I would have made the end but not in time. I called it a bus of shame at the time but it was far from that. We were all upset but there was still an energy amongst us. Such a long day in the road without a medal. That’s not true. We made it up the Big 5 (Cowies Hill, Fields Hill, Botha’s Hill, Inchanga and Polly Shortts), we ran further than most people can run, we are heroes to someone. No one can take the accomplishment of what we did away.

Thank you:
I would like to thank my wife Julia for all her support leading up to and including race day. It is amazing that knowing someone is there for you can get you so far. It is a very selfish period as you need to be focussed on your training and diet for the build-up to the Comrades. She deserves a huge medal. We then made our way on Tuesday up to Hluhluwe-iMfolozi Park and Pakamisa for a well-deserved break.